I still wasn’t feeling any better. I was still being sick and had barely slept due to getting up to go to the toilet every half an hour or crying in pain. I was struggling to take any painkillers because I just threw them back up and still wasn’t keeping water down. I’d given up with the fibre sachets from the doctor, hadn’t even attempted the antibiotics, and had given up with my ice cube diet as it just made me hungry. So Mum took me to the walk in centre, which the doctor had said to do if I deteriorated overnight, which I think it’s safe to say I had.

We got there for 9am, easy to do when you’re not sleeping and you’re awake anyway at that time of the morning, but we still waited over an hour to be seen only to be told by the nurse there was nothing they could do as I have already had all the tests done that they would order. However this lady said she could tell how ill I was just by looking at me, that was before I’d told her I’d lost near enough two stone in ten days, as soon as I’d said that (along with some tears) she said she’d arrange for me to see the on call doctor.

On to the second (of many) medical professional of the day, it was an older guy who seemed lovely and just seemed to care. He asked me what was wrong, and looked at my notes for the results from my blood, stool and urine samples. He was shocked at how I was still walking around considering how long it was since I’d last eaten / drunk anything, how much weight I’d lost in such a short time and the fact that my inflammation markers were so high. Both Mum and I questioned this as we’d previously been told they were only “slightly raised” to which we were pretty much told they were too high and it suggested there was a serious inflammation somewhere (obviously my tummy).

From looking at me physically, and looking at my inflammation markers he thought it was some form of Inflammatory Bowel Disease but couldn’t be sure whether it was Crohn’s or Colitis, but either way I needed to be admitted to hospital. I cried – partly out of fear, mainly out of relief. Someone was finally taking me seriously about how ill I felt. He was such a nice man, and honestly if it hadn’t been for seeing him that day who knows where I’d be because my GP surgery didn’t seem bothered about doing anything to help me or investigate further.

It was from there that I was admitted to AEU where I had and ECG and a cannula was put in my arm, I cried all the way through but it might have been because of tummy pains or the fear of the needle, I can’t really remember which! Tests were carried out and a doctor confirmed I’d be spending “a few” days in hospital so Mum got Dad to bring up some clothes for her for the following day as she was allowed to stay. 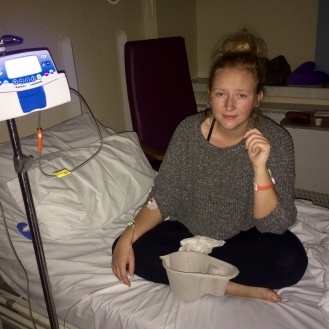 From there I was moved down the hallway to MDU to a private room with a bathroom until there was a bed free on Langham Ward (a specialist gastro ward). I was put on a drip to bring my fluids up as I was really dehydrated and malnourished, I was also still being sick on a regular basis as well as having less than 30 seconds to get to the toilet every time I needed to go. It was a nightmare trying to dash to the loo whilst attached to a drip stand and holding a sick bowl, and thankfully they let my Mum stay with me. I didn’t like MDU, to be honest I didn’t like hospital at all at first. I still felt really ill and it was an unfamiliar place with unfamiliar people and sounds but I knew it was where I needed to be.

1am came around and there was finally a bed, however I was told I was moving to Mersea Ward instead. We just went along with it, as I was still going to be in a private room with a bathroom which put me slightly more at ease. I was terrified of messing myself in the middle of a ward as a result of not being able to get to the bathroom in time, and then what if the bathrooms were all occupied. When I needed to go, I needed to go, there was no time to wait. It was a case of 30 seconds or else.

In June, I'll be walking 10km around London to raise money for Crohn's & Colitis UK. If you'd like to sponsor me and help me reach my target of £200 then click the link below - thank you!

Crazy to think this time last year I was on appointment number four of the year 😞 #hospital appointments #chronicillness #ulcerativecolitis #inflammatoryboweldisease #surgery #colectomy #jpouch #ileorectalanastomosis
When Mary holds your hand, you feel so grand. Your heart starts beatin’ like a big brass band ✨ #marypoppins #princeedwardtheatre #london #christmaspresent #besttime
Hope you’re all having a fab Christmas. As per, Lexi loved opening my presents for me 😅🐶 #christmasday #doggo #presents #cheeky
Make up - helping me fake feeling well since late 2015 xo #me #girl #ginger #wavyhair #selfie #fakeittillyoumakeit #ulcerativecolitis #flaring #invisibleillness #inflammatoryboweldisease #ibdlife #stoma #ileostomy #proctitis #nocolonstillrollin #kindof
Three years ago today, I was being wheeled into surgery. My stoma was only meant to be a temporary measure, “3 - 6 months at most” is what I was originally told. But that was 1,095 days ago and three years on Sally is still a part of my life and will continue to be for the next five years or so. I don’t think I’ll ever like her, but I’m grateful she’s given me the gift of life. So thank you Sal, and happy birthday 3️⃣🎉💩
The other day was 3 years since I was diagnosed with Ulcerative Colitis. 3 years since I was told I’ve got this incurable autoimmune disease and I would need surgery “at some point”. Do you ever really become okay with that? Do you ever really accept that your body has decide to malfunction and attack itself and that there’s no cure for it? I don’t know. All I know is I’m still not okay with it. So a friend took me out for dinner to distract myself from thinking about it too much. It was exactly what I needed and the food was lush. Thank you Moose 🖤 #datenight #ulcerativecolitis #anniversary #threeyears #ibd #inflammatoryboweldisease #lifetakesguts
%d bloggers like this: