I’ve just got back from a few days away with one of my best friends so I thought I’d do a blog post on it and let you all know what we got up to!

The main reason we went over to Dublin was to see Ed Sheeran. Bit of a distance to go just for a concert, but the London dates of his show sold out so quickly I thought a trip to my favourite city would be made even better if we were to see Ed as well!

So it all started with a very early morning last Tuesday – 3am to be precise! My Dad works at Stansted Airport (where we were flying from) so he said he’d take us to fit in with his shifts. So although our flight wasn’t until 8am, we left the house at 4am so that Dad wasn’t late for work!

After some very early breakfast we were all ready to board the plane and set off, and naturally, I was tired so I fell asleep pretty quickly and for the majority of the flight. Was only when I woke up just as we were about to land that Hannah told me that there had been turbulence the whole journey and that I’d slept through the whole thing – oopsie! 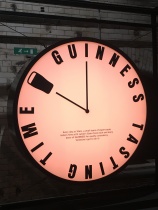 When we arrived in Dublin we couldn’t check into our room till 2pm so as it was just before midday we had some lunch then set off to go to St James’ Gate aka. The Guinness Storehouse! We spent the afternoon learning all different facts about Guinness (and drinking it) and I also learnt how to pour the perfect pint – something Hannah can already do as she works as a bar tender!

After our adventures round the storehouse and numerous shameless selfies we headed back to the hotel to get ready to go out for dinner and finally check in. We both fancied Chinese of some sort so when we saw there was a Wagamama’s round the corner we set out to find it! So that was our plan, dinner then a few drinks in Temple Bar and an early-ish night as we’d been travelling all day.

However as we were walking along to Wagamama’s we saw that Derren Brown was playing in the local theatre. We thought we’d try our luck and see if there were any seats left, which there were. Row F, seats 12 & 13 which just so happened to be the sixth row from the stage and smack bang in the middle of the row. So we thought “hey why not, when in Dublin” and booked tickets then went for dinner. 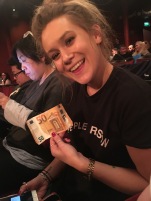 As we got to the theatre and sat down waiting for the show to start we realised there was a lack of people sitting around us and were joking that we were sitting ducks to get picked on. It was so crazy, as if we could predict the future, and sure enough Hannah got picked on within 5 minutes of the show starting. I won’t ruin it too much for anyone who has tickets booked to see him on this tour, but Hannah won €50 out of it!

After that it was back to the hotel to go to bed ready for a long day tomorrow.

The following day we wanted to go shopping as we had the concert in the evening at Phoenix Park. We spent the day mooching around the shops then covered ourselves in glitter whilst getting ready. Glitter which may I add, I am still trying to wash out my hair A WHOLE WEEK later. It was everywhere. 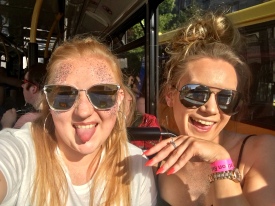 We hadn’t really thought about how we were going to get to the concert until 3pm that day, we were just going to wing it. Which is when we saw that there was a shuttle running aptly named Sheeran’s Shuttle so we decided to get that.

Overall, I’ve been fairly “good” recently with regards to the flare in my rectum. When I get the feeling that I have to go I know I’ve got another half an hour or so before I become super desperate, but that was all about to change. We were nearly at the park when I couldn’t

wait any more and knew I HAD to go to the toilet ASAP. As we were sat upstairs we went down to the driver and I said that I was sorry to disturb him but I have colitis and I reallllllly needed to go to the toilet so could he stop at the next building and let me get off to go to the toilet. He was so nice, he let me off the bus to walk the rest of the way and said that a close friend of his has Crohn’s so he understood that sitting down would make things worse for me. He also said he’d let me back on the bus later when they caught up as there was loads of traffic.

We walked the last 10 minutes to the edge of the park and I made it to the toilet thankfully. But then we still had to walk through the park to get to the entrance to the venue. It didn’t seem very well organised. No one knew where we were meant to go, they just pointed in a vague direction but then people were walking in two opposite ways. Another 15 minutes or so later, after mistaking a group of deer for people sat down, we were next to where the buses stopped to let people off and I found the lovely bus driver and thanked him again. He was so kind and understanding it was a pleasant surprise. I didn’t catch his name, but I wish everyone had an understanding like he does.

Fast forward a few hours, we’re in the arena waiting for Ed to start. With glitter all on our faces and in our hair we realised that glitter must be an English thing as none of the Irish people had any on them. But we decided to rock it and loved every second. Not going to lie, we were nowhere near the front. We were 3/4 of the way back, probably more, way past the merchandise stand but it was such a good atmosphere. Until I got that feeling. I had to go to the loo. ASAP.

I’d love to say I made it to the toilet in time, but I didn’t. I don’t know what happened, I never leave it too late to get to the toilet but this feeling just came out of no where, and I felt like I only had seconds to get to the toilet and then it was too late. So I was stood in a huge crowd, crying my eyes out, and no one had any idea why I was so hysterical. I found a steward and explained that I’ve got colitis and had just messed myself and they rushed me to the medical tent and found me some tin foil blankets to wear. They tried to find me some scrubs to change in to but they couldn’t find anything and the best they had to offer was the foil blankets. What’s even more frustrating though, other than the fact my UC ruined a perfectly good evening, is that according to the medical team at the hospital I’m under, my UC doesn’t interfere with my life enough to need medicating ie. I’m not sick enough to treat…

After calming me down and Hannah being an absolute gem and cuddling me and listening to me crying, we made our way out the medical tent, but stayed close by in case I had to rush again. That’s when a lady came up to me and gave me her jester hat, because she thought I was in fancy dress, so naturally I took it home as a souvenir! I had several people coming up to me telling me I looked like the coolest mermaid, and a princess, but little did they know it was because I had messed myself. So I just went along with the mermaid thing because why the hell not?

We missed at least half the concert. I was so annoyed with myself. I was humiliated. I was angry. I was upset. I was ashamed. I was feeling every feeling under the sun and most of all I felt guilty. I felt guilty that Hannah had paid all that money to go and see Ed and I’d ruined it for her. If she reads this she’ll be rolling her eyes at the screen and texting me to tell me to stop being so silly and that I didn’t ruin it for her, which is what she spent all evening telling me, but I can’t help it. 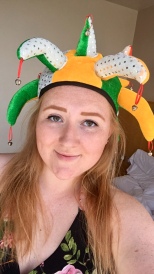 All I can say though is that I’m so glad that something like that happened with someone like her. She’s never once commented on us missing out on something because my rectum is being an arse (pun intended) and this time was no different. She’s an absolute angel and I don’t think I would have been able to enjoy the last 10 minutes or so if it weren’t for her. Hannah, I love you.

After an eventful night the evening before, we went to Dublin Zoo on the Thursday! The weather was a bit meh, it was sunny,  but kind of breezy. Hannah decided to take a jacket, but I figured I’d be okay without.

As it turns out, Hannah spent the majority of the day wearing her jacket, and I ended up getting sunburnt, but it faded to a tan after a couple of days. However Hannah enjoyed laughing at my tomato coloured shoulders with a nice white stripe across my chest from where my bag strap had been – rookie error!

Whilst we were at the zoo though we grabbed lunch at a cafe, and I have never been so scared of some birds in my life.

They were stalking the area and then one helped itself to a ladies burger. It just walked up to the bench she was sitting on and swiped the burger, then all hell broke loose and it was a free for all. Even the squirrel wanted to get involved. It’s safe to say that I have never seen a burger be eaten as quickly as that group of birds demolished that. It was gone in under 2 minutes!

That evening we headed out for dinner and then had some drinks in Temple Bar before it was back to the hotel to pack and get ready for our journey home the following day.

It was a whirlwind visit, but I loved it and I can’t wait for my next adventure with Hannah at the end of June – this time to a sunnier destination a little further away from home. All will be revealed soon!